A Birthday Bash for Bernie 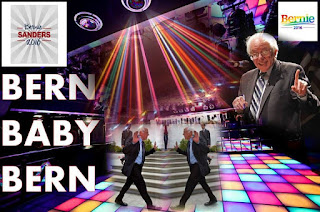 Happy Birthday, Bernie! September 8 is Bernie Sanders' birthday, and his supporters are celebrating it in a variety of ways. Many are donating money to Bernie's campaign on his birthday--$8 on September 8 according to the Facebook moneybomb page. It's amazing how quickly all those thousands of small donations add up! Go to BernieSanders.com to give via Paypal or credit card. Here's a direct link to donate: https://secure.actblue.com/contribute/page/reddit-for-bernie


Valentina Fiorillo: I would say to Bernie, Thank you for teaching me and the other millennials that this is our country, too. We may be young, we may not have money, but each one of our voices matters more than a dollar does.

C.A.:  Happy birthday to you, Bernie! May you enjoy many, many more as President of the USA! We need your leadership now more than ever. Thank you for running for the White House and giving us all hope that America can be a good and happy land once more. God bless!

Best wishes on your special day, Bernie! We wish you all the best and pledge our support to help you make America a better place to live, work and celebrate our diversity in. --Your friends at The Bernie Blog bernie2016.blogspot.com


Since Bernie's special day comes close to Labor Day--and Bernie supports (see link above) and is supported by numerous unions and labor groups--many supporters walked in Labor Day parades carrying Bernie for President signs or held picnics where they could chat with other voters about Bernie's vision. 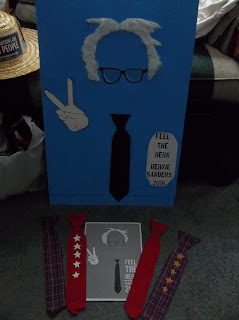 Here are some photos from the Bowling Green (Ohio) Pride Picnic held this past weekend. For Bernie's birthday, we played a traditional birthday party game to celebrate: Pin the Tail on the Donkey. Except this game had a twist, and the "donkey" (Democratic Party symbol) is implied. Welcome to the new game of "Pin the Tie on Bernie"!

First, you start with a great image from Stencils from Bernie to create your "Bernie" (complete with fuzzy hair, cool specs and peace sign hand) and his "ties"... 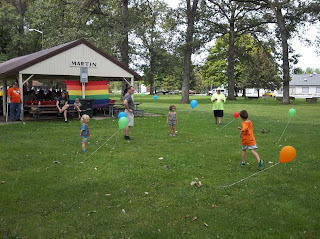 And ask people to play... 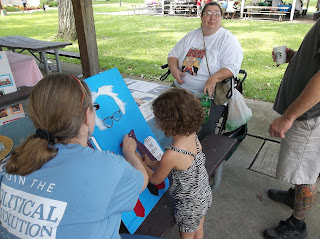 The young and the young at heart...


We had a great time at the B.G. Pride Picnic. Lots of folks are excited about Bernie Sanders running for the White House. Since this was our first time doing anything to promote a political candidate, we weren't sure if we were up to it, but you know what? It isn't all that hard to do. Bernie's policies are so upbeat and positive that they really share themselves. Who doesn't want a more compassionate America? So, don't be shy! Get out and talk with your fellow Americans and share information about Bernie Sanders. You might even make a new friend--or form a "Bernie Bond"--while you're helping build a better America.
We dare you to make a "Bernie Bond" today!


Happy Birthday to Senator Bernie Sanders, our next president!
From your supporters: Adrian, Cindy and Jamie