The Clinton campaign is suspected of voter suppression once again. This time it's against the Green Party.

BlackBoxVoting.Org is a nonpartisan investigative reporting and public education organization for elections.

Lee Camp's Redacted Tonight is funny (and profane) but tells the hard facts about election fraud in an easy to understand manner.  Watch this video and learn a lot while laughing: https://youtu.be/L0v9tvIYpfU 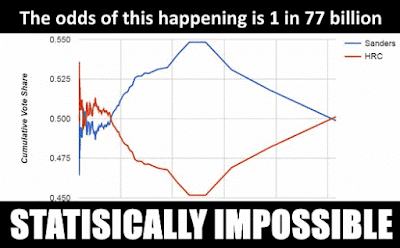 This is a very long list of article and video links showing a pattern of election fraud and voter suppression in the 2016 Democratic primaries. Many thanks to Canis Poetam for sharing these links with us.

Media Blackout: Elephant in the Room Incredible Election Fraud All in Favor of Hillary Clinton
http://wearechange.org/media-blackout-elephant-room-incredible-election-fraud-favor-hillary-clinton/

Richard Charnin's Blog on Systemic Election Fraud Analysis has a lot of good information, particularly on how exit polls and hand-counted ballots don't line up with machine voting totals. https://richardcharnin.wordpress.com/

Excerpt:
Our democracy lives on transparency, fairness, and justice, and when our elections are blatantly corrupted and fraudulent, that democracy dies. We can either stay silent and watch our country disintegrate or stand up and fight for our rights. So, if you are disturbed by my findings, please share this as widely as you can and demand independent investigations into our elections.

Our democracy depends on it. 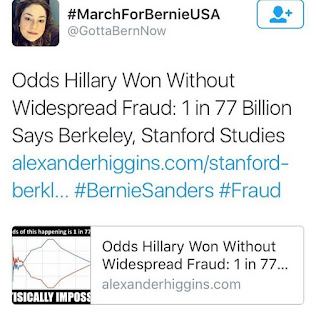 The Election in Arizona Was a Mess
AJ Vicens | March 24, 2016 | MotherJones
http://www.motherjones.com/politics/2016/03/arizona-primary-long-lines-voting-restrictions

Arizona’s Primary Voting Was Such A Mess That DOJ Is Opening An Investigation
by Kira Lerner| ThinkProgress | April 5, 2016
http://thinkprogress.org/politics/2016/04/05/3766508/doj-investigation-maricopa/

What the hell just happened in Nevada? Sanders supporters are fed up — and rightfully so
Allocations rules were abruptly changed and Clinton was awarded 7 of the 12 delegates Sanders was hoping to secure
Sean Illing | May 16, 2016 | Salon
http://www.salon.com/2016/05/16/what_the_hell_just_happened_in_nevada_sanders_supporters_are_fed_up_and_rightfully_so/

Van Jones rips DNC chair over rift between Sanders and Nevada Dems: ‘I think she made it worse’
Arturo Garcia | May 17, 2016 | RawStory
https://www.rawstory.com/2016/05/van-jones-rips-dnc-chair-over-rift-between-sanders-and-nevada-dems-i-think-she-made-it-worse/

The Faux Fracas in Nevada: How a Reporter Manufactured a Riot
Doug Johnson Hatlem | May 18, 2016 | CounterPunch
http://www.counterpunch.org/2016/05/18/the-faux-fracas-in-nevada-how-a-reporters-pack-of-lies-ran-riot-in-the-fact-averse-media/

I watched Hillary Clinton’s forces swipe Nevada: This is what the media’s not telling you
Gayle Brandeis | May 20, 2016 | Salon
http://www.salon.com/2016/05/20/i_watched_hillary_clintons_forces_swipe_nevada_this_is_what_the_medias_not_telling_you/

Bernie Supporter Confronts Vegas Reporter On Rachel Maddow
Interview: Delegate Angie Morelli | May 20, 2016 | The Jimmy Dore Show
https://youtu.be/bi5Ec_7gNlE
5:24 - 5:50
"We had 4,000 of the most passionate people in this valley who got in a room together, and you put them in this confined space for 15 plus hours . . . who had little access to food and had three bars outside of the convention center that were put there specifically for us, and I don't know in what other situation where that wouldn't have created high emotions. . . .

Students Are Being Rejected From The Polls Because Of North Carolina’s Voter ID Law
Kira Lerner | March 15, 2016 | Think Progress
http://thinkprogress.org/politics/2016/03/15/3760266/north-carolina-voter-id/

Report: Up to 500K Californians may be blocked from voting
David Wright | April 18, 2016 | CNN
http://www.cnn.com/2016/04/18/politics/los-angeles-times-registration-investigation/index.html

Has Clinton Actually Won Anything? The Theft of Election 2016
The Justice Gazette | March 20, 2016 | The Justice GYoung Turks Reveals How the DNC and 33 States Used Loopholes to Funnel Millions Into the 'Hillary Victory Fund'
Alexandra Rosenmann | AlterNet | April 5, 2016
http://www.alternet.org/election-2016/how-scotus-decision-best-described-citizens-united-steroids-used-state-loopholes

How the Hell We Got Here: Why the Democratic Party is Splitting
Walker Bragman  |  May 18, 2016 | Paste
https://www.pastemagazine.com/articles/2016/05/how-the-hell-we-got-here-why-the-democratic-party.html

Cheating Hillary Has Not "Won" More Votes, So No One is Obliged to Support Her
Ralph Lopez | May 28, 2016 | Hubpages.com
http://hubpages.com/politics/Cheating-Hillary-Has-Not-Won-More-Votes-No-One-Has-an-Obligation-to-Support-Her

Was the Democratic Primary Just Manipulated, or Was It Stolen?
Victoria Collier and Ben Ptashnik | June 13, 2016 | truth-out.org
http://www.truth-out.org/news/item/36408-was-the-democratic-primary-just-manipulated-or-was-it-stolen

Sanders Supporters Cry Foul over Clinton's Suspicious "Secret Win" Email
Tuesday, June 07, 2016 | Common Dreams
http://www.commondreams.org/news/2016/06/07/sanders-supporters-cry-foul-over-clintons-suspicious-secret-win-email
Excerpt:
The timing of AP’s announcement–on the eve of primaries in California, New Jersey, New Mexico, Montana and South Dakota, and caucuses in North Dakota—raises concerns of voter suppression, intentional or not. The six states choose a total of 806 delegates on June 7, making it the second-biggest day in the Democratic primary calendar (after “Super Tuesday,” March 1, when 865 delegates were at stake).

News outlets generally withhold the results of exit polling until voters have finished voting, regardless of how far ahead the leading candidate is, because they don’t want to confuse poll-based speculation with the actual electoral results. AP, it seems, has no such qualms.

If You Want Solid Evidence That Clinton Is Corrupting the Political Process, Here It Is
Nathan J. Robinson | April 23, 2016 | CurrentAffairs.org
https://www.currentaffairs.org/2016/04/if-you-want-solid-evidence-that-clinton-is-corrupting-the-political-process-here-it-is