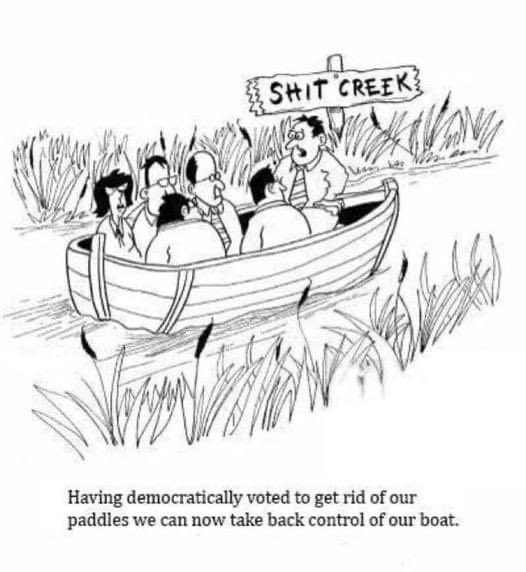 "The Great Man" theory of history says that history is made by certain charismatic individuals. They inspire and lead others into creating a better country, world, and/or universe. Or not.

It got me to thinking... Who are the "Great Americans" who have shaped our recent history? Surely they'd be mentioned quite a bit in the media. So I thought I'd take a stab at it by scanning the headlines of my Facebook and Twitter feeds this past week. These are the names of "Great Americans" I came across.

A lot has been written about the late Secretary of Defense--some of it flattering and some of it quite disturbing. Here's a typical summary of this civil servant's life: 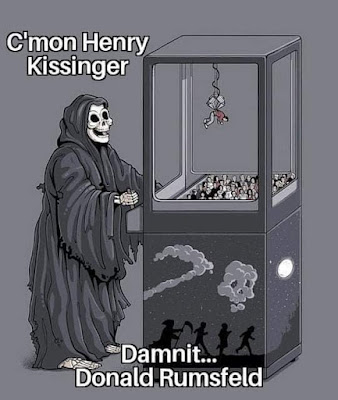 Donald Rumsfeld just died at the age of eighty-eight. Obituaries at outlets like the New York Times and CNN consistently mention the same memorable but pointless bits of trivia. He was America’s youngest secretary of defense (in the Ford administration) and the oldest (in the George W. Bush administration). He wrote so many memos about so many subjects that they came to be known as “snowflakes.” Arriving at the Pentagon in the 1970s, the Times tells us, he became famous for “his one-handed push-ups and his prowess on a squash court.”

To see the full absurdity of this, imagine an obituary of Slobodan Milosevic that lingered on innocuous details of his office management style and fondness for soccer, or an obituary of Saddam Hussein that focused on how young he was when he formally became president of Iraq in 1979 and his favorite dessert in his Baghdad palace.  -- Ben Burgis, from Donald Rumsfeld, Rot in Hell https://readersupportednews.org/opinion2/277-75/70238-donald-rumsfeld-rot-in-hell

Here are some other articles reminiscing about Mr. Rumsfeld:

Donald Rumsfeld's Legacy Is Defined by the Disastrous Iraq War and America's Disgraceful Use of Torture  https://readersupportednews.org/opinion2/277-75/70199-donald-rumsfelds-legacy-is-defined-by-the-disastrous-iraq-war-and-americas-disgraceful-use-of-torture

Rumsfeld Was Not “Controversial.” He Played a Leading Role in Mass Murder  https://truthout.org/articles/rumsfeld-was-not-controversial-he-played-a-leading-role-in-mass-murder

Rumsfeld's Much-Vaunted 'Courage' Was a Smokescreen for Lies, Crime and Death
https://readersupportednews.org/opinion2/277-75/70219-rumsfelds-much-vaunted-courage-was-a-smokescreen-for-lies-crime-and-death

What do you think? Is Donald Rumsfeld a "Great American"? 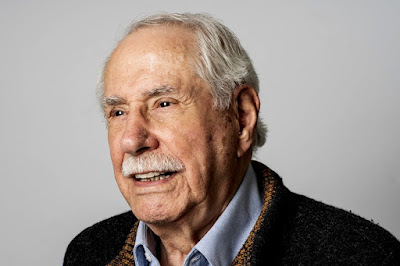 The late senator from Alaska made a name for himself when he boldly read the Pentagon Papers into the Congressional Record. Straight-talking and peace-promoting, Gravel's most recent run for the presidency was actually started by his "fans" on Reddit.

There are many stories and videos detailing the life and times of Senator Gravel, and last week's blog featured one of them. Here's another:  Courageous Anti-War Truth Teller --Mike Gravel RIP  https://youtu.be/nmahus6SSfc

What do you think? Is Mike Gravel a "Great American"?

The next one causes me great personal distress, but it's a name that came up repeatedly. 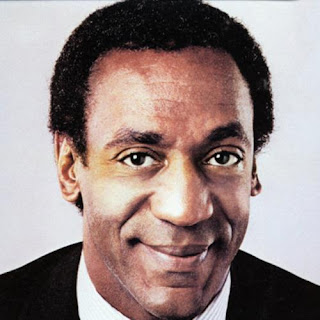 Mr. Cosby made the news again recently when his sentence for rape was overturned by the Pennsylvania Supreme Court. Apparently openly admitting in a civil case to drugging and sexually assaulting 60+ women can be easily dismissed on a technicality.

I grew up watching Bill Cosby on television most days. I loved his Cosby Kids cartoon series and especially enjoyed his "Fat Albert" character. Later on, he became even more famous as a doctor and family man on another long running TV series. That this "bastion of family values" could get away with rape--not once but dozens of times--makes me furious and sick to my stomach.

Cosby's release is more than a slap in the face to his victims--it sets a dangerous precedence that famous men of wealth can expect to receive a different form of justice.

There's One Man to Blame for Bill Cosby's Release https://readersupportednews.org/opinion2/277-75/70207-theres-one-man-to-blame-for-bill-cosbys-release

What do you think? Is Bill Cosby a "Great American"? 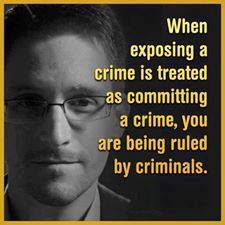 Edward Snowden periodically makes the news with his writings, podcasts and video interviews. Of course he's most famous for spilling the beans on how the US government spies on its own citizens.

Exiled to Russia, if Mr. Snowden ever steps a foot again on American soil they'll lock him up the same as they have other whistleblowers. Our government wants to protect us from nasty truths about itself, after all. It's for our own good that we remain in the dark, don't you know.

Edward Snowden: Why Do Conspiracy Theories Flourish? Because the Truth Is Too Hard to Handle https://readersupportednews.org/opinion2/277-75/70229-why-do-conspiracy-theories-flourish-because-the-truth-is-too-hard-to-handle

What do you think? Is Edward Snowden a "Great American"?

I realize that those who make the headlines aren't always worthy of the praise--or the slurs--they incur. Americans really need to start thinking hard about how they want our nation to be remembered by future generations of Americans (if there are any). Do we want to be remembered for Rumsfeld or Gravel? Cosby or Snowden?

Or perhaps the real question is, "Will we be remembered at all?"