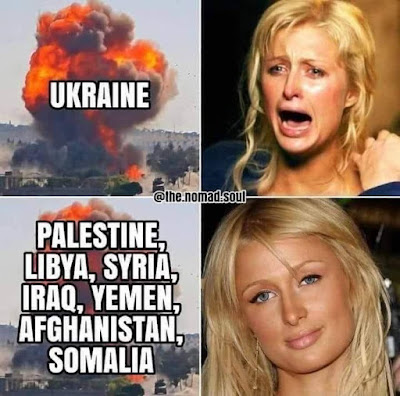 Update: Since this was published online, there's been yet another mass murder--this time at an elementary school in Ulvade, Texas. We'll talk about it in next Tuesday's post, but in the meantime, I believe this week's theme explains much about America's obsession with gun violence and sponsoring bloody warfare around the world.

This week we're all still reeling from the hideous massacre of ten African Americans by an 18 year old white boy. Shooter Payton Gendron drove three hours to predominantly Black East Buffalo to hunt down residents. His 180 page manifesto demonstrates that he idolizes the white supremacy philosophy of the Ukrainian Azov Battalion. Where did an American kid ever get such a horrific idea that actual Nazis are to be worshiped and glorified? 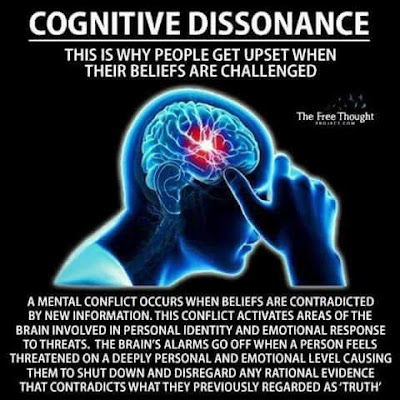 Could it be that our dumping of billions of dollars of weaponry into the current proxy war and the mainstream media's downplaying of the Nazi white supremacist attitudes of the Ukrainian militias is to blame? Gendron made it clear that he sympathized with the Azov Battalion when he displayed their Nazi symbology, yet Biden and his neoliberal lackeys in the media continually downplay and actively try to rehabilitate their members' heinous reputations.

Our armchair historian gives us the following words of warning to those who would try to excuse fascism. 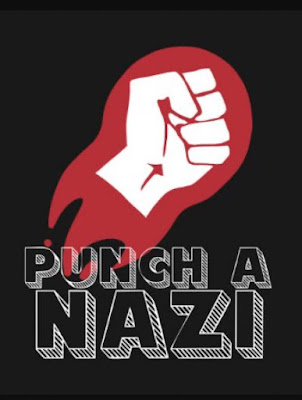 Knowing history as I do, I am continuously baffled by those who insist that there are "good Nazis."

People, there’s no such animal!

All those images of young men (and it is young men for the most part) sporting battledress badges and tattoos with Nazi symbols are exactly what they appear to be—Nazis.

Symbols have meaning. A "Caution: Contents will be hot after heating" symbol means the contents of a receptacle will be hot after heating. "Danger: Wet floor" means the surface of the floor is wet and dangerously slippery. Nazi swastika, SS lighting bolt, and black sun images mean exactly what they indicate—the person wearing them is committed to persecuting Jews, Gays, the Roma, the disabled—in fact anyone their extreme right-wing ideology tells them to, to the point of killing them in the most brutal way possible.

If somebody tells you otherwise, refer them to a history of Nazi German atrocities during the 1930s through to 1945. Don't forget to include those perpetuated in Ukraine and Russia following Operation Barbarossa, the 1941 invasion of the Soviet Union. The Azov Battalion people you are praising to the skies for defending Ukraine against Russia are ideologically no different to those SS folk 77 years ago. In fact they wear the same symbols to show their ideological connection and affinity with those fascist invaders. The "enemy of my enemy is my friend" does not apply to these people.

Get this through your head: There. Are. No. Good. Nazis. 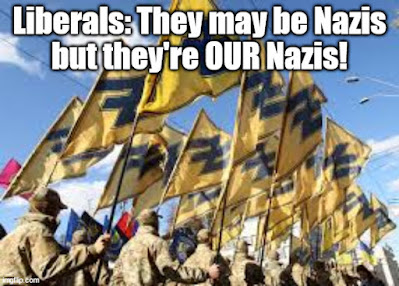 What does this defense of fascism mean to America and the West in the long run? Peace activist and former Green Party Vice Presidential candidate Ajamu Baraka states:

Zelensky talks about the need to “defend the West,” “Europeanness,” “Western values,” and the liberal/left does not recognize the inherent assumptions of white supremacy in those terms. But Payton Gendron did and is why he enlisted in Zelensky’s fight not in Ukraine but in the middle of an African American community.

History will determine that. But what some of us see is a racialized discourse operating just below the surface in which Europe and Europeaness that Ukrainians strive for is also connected to a racialized trope of Europe being ontologically civilized while the less-white Slavs are barbarians, prone to irrational violence, like the Russians who decided “out of nowhere” to just attack Ukraine!

We also understand that downplaying the threat of a resurgent white supremacist fascism in its most sophisticated form represented by Zelensky who has become that slick, right-wing politician with politics as racist as Trump but without the crudeness who many feared could emerge in the U.S. No one could have anticipated that person would emerge in Europe as the lovable face of fascism.

Buffalo closes the loop that connects crude white supremacy with its more polished and dangerous expression. Both of these versions represent a consensus that is committed to using force and violence to ensure that white power will not to be “replaced.” This new consensus has created the ideological foundation for the legitimation of a cross-class white supremacist defense of something called European values and the interests of Europe. The lack of concern for the consequences of the war and sanctions on the rest of the world confirms that this consensus and the interests it defends are in contradiction to the interests of the non-Western global majority.

For us, Buffalo is not a wake-up call but a declaration of war. 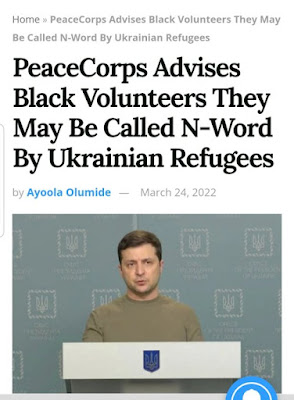 Massacre in Buffalo Highlights the Legacy of Racist Violence https://popularresistance.org/massacre-in-buffalo-highlights-the-legacy-of-racist-violence/

New Laws Make It Hard for Some Educators to Discuss Buffalo Shooting in Class https://truthout.org/articles/new-laws-make-it-hard-for-some-educators-to-discuss-buffalo-shooting-in-class/

Buffalo, The Tulsa Massacre and the Legacy of Anti-Black Violence https://www.rsn.org/001/buffalo-the-tulsa-massacre-and-legacy-of-antiblack-violence.html

Cornel West: "White supremacy is as American as apple pie, as the latest killings in Buffalo show. Biden needs to take a stand against neofascists."  https://www.theguardian.com/commentisfree/2022/may/21/trump-black-white-supremacy-buffalo-joe-biden 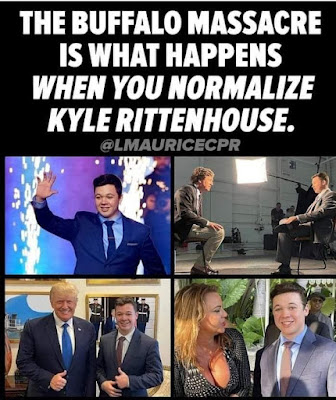 What goes around comes around.
The Orwellian thought police may pretend Azov aren’t neo-Nazis. But for white-supremacists, the praise being heaped on Ukrainian neo-Nazis is a public relations coup.
That should terrify us all. https://t.co/TYhuLAD33t

Biden went to Buffalo, read off the names of the people killed by a white supremacist and said there was no place for white supremacy in America

No more civilians to hide behind, no more undertrained Nazis on the frontlines. Now it’s just Russia VS NATO head on. Get ready y’all. The battle is over but the war has just started.

literally no one believes this pic.twitter.com/JnGVUnQ8Np

They gave an extra 48 Billion and weapons to Ukraine and the next day they lost the battle. 😆 Talk about a waste of money.

Lead in the water,
Dotard in the white house,
Dollars for Nazis.

Wars have always come home in one way or another.