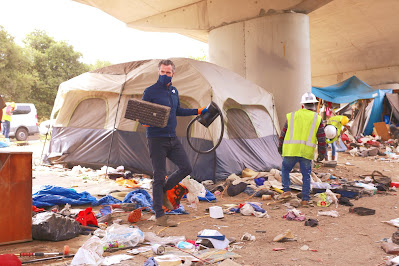 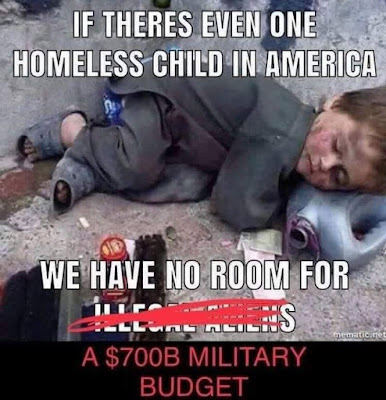 by C. A. Matthews

Arresting the homeless for camping in public areas, "loitering" in parks, and sleeping on sidewalks is nothing new. In fact, Los Angeles recently passed a law that makes being homeless in the city illegal. Police regularly grab and pitch people's tents and belongings, and there are well over 66,000 homeless individuals in L.A. at last count.

What if we flipped this social challenge on its head? What if we didn't turn the homeless into "outlaws" but outlawed the whole tragedy of homelessness instead?

How would this work? I envision a similar program such as the one implemented in Finland. If a person is found to be without a secure home--for whatever reason--we simply provide one for them. It's not like there's any shortage of housing. It's estimated there's at least 17 million empty housing units in the US. That's more than enough to house the current estimate of 11 million homeless individuals. 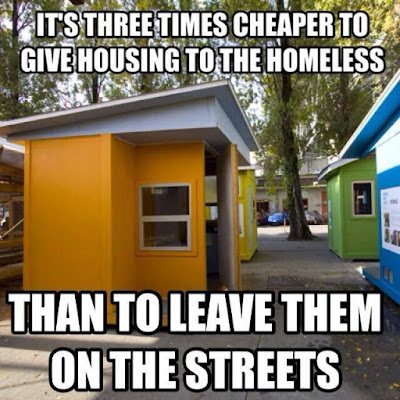 So, what gives? Why aren't we providing homes for folks who need them when there's no shortage of empty homes? Answer: Because capitalists like landlords and international real estate holding firms don't want to fill those empty homes. It's better in their opinion to make everyone believe there's a shortage of housing so the capitalists can charge higher rent prices and drive up sale prices when they do decide to sell off some of their surplus housing stock.

Simply put, capitalists hoard things--money, houses, spaceships, yachts, etc.--so that others can't use them. The capitalists themselves aren't in need of these surplus homes since they have homes of their own in quite nice neighborhoods. They just don't want these empty homes they're hoarding to be used unless they can dictate the terms, even if these terms mean that ordinary people won't be able to afford to rent or buy these homes and even could be evicted during a pandemic.

Logically, then, the only way to effectively outlaw homelessness is to outlaw capitalism. Forever.

You're probably thinking, "It can't be done!" but I beg to differ. It can be done and it must be done for the sake of our homeless (and about to be evicted) neighbors. "How can it be done?" is the better question, and it's a tough one to answer. Why? Because for every homeless person in the US there are at least a dozen others working against any change in the status quo.

And why do Americans (some of whom aren't particularly well-to-do) wish to maintain things they way they are? Why should they support the capitalists at all? The obvious answer is that those who have a lot of wealth and power are loathed to give any of it up, and those who kiss up to the capitalists are hoping some of the "crumbs" will fall from the capitalists' table and into their laps. 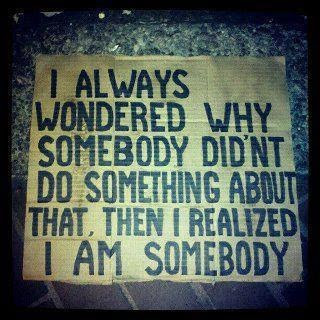 But I believe there's a deeper fear beneath this heartlessness and hoarding. I believe that many capitalists (and their sycophants) are afraid that if they share any of their material wealth they will somehow be diminished in the eyes of others and thought less of. We might even make fun of the way they dress, talk, act, and well... hoard things.

In other words, capitalists are deeply afraid that no one will take care of them if and when they ever need to be taken care of, and they'll become as unwanted and uncared for as those poor souls currently camping in our cities' streets.

It's not an unreasonable fear on the capitalists' part. They realize just how much they hate their "neighbors," so they conclude that their "neighbors" are bound to reflect some of this hatred back at them. I've covered this particular irrational fear before, so I won't go into it here. You can read all about it in this piece: Why are the rich so scared of socialism?

It's insane. It's inhumane. But that's capitalism for you. 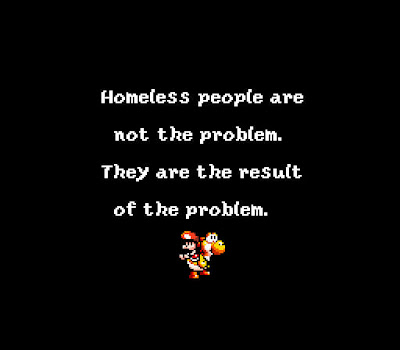 Here are some more videos and articles to think on:

Capitalism is Holding All of Us Hostage  https://therealnews.com/richard-wolff-capitalism-is-holding-all-of-us-hostage

Why Are the Rich So Scared of Socialism? https://bernie2016.blogspot.com/2020/01/why-are-rich-so-scared-of-socialism.html

What’s it called when the bank says you cannot afford a $950 mortgage payment so you’re stuck paying $1500 in rent instead.

Demand that Congress pass an eviction moratorium that protects EVERY American!

There are more than 11 million undocumented immigrants in the U.S. and every one should have a safe pathway to citizenship.

Immigrants are essential to the success of America. During the pandemic, roughly 23 million immigrants -- including 5 million who are undocumented -- served as health care workers, public health and safety workers, food system workers and farmworkers.

Some of the undocumented are Dreamers, brought here as children. Other immigrants are here legally due to war, political persecution or natural disasters in their countries of origin.

A recent Gallup poll proves that the American people overwhelmingly, by a 75% to 21% margin, support creating a pathway to citizenship.

Now we can make it happen. Senator Bernie Sanders, Chair of the Senate Budget Committee, has included $150 billion in the $3.5 trillion budget reconciliation proposal earmarked specifically for implementing immigration policies, including a pathway to citizenship.

But Bernie needs our help building support to make sure it doesn’t get cut during negotiations on a final bill. It’s time to finally let the undocumented come out of the shadows with a pathway to citizenship.

Please write a quick message to your members of Congress demanding they support the inclusion of a pathway to citizenship in the budget reconciliation package right now.

Our letter writing tool is easy to use.

Just enter in your information and we’ll find and target your letter to your members of Congress. We’ve provided suggested text too, but if you’d rather write your own you can edit it and say it in your own words.

Whether your message is short and to the point or long enough to tell your personal story -- or one of a friend or family member -- you can be sure your letter will be delivered immediately.

For too long Congress has failed to take action on immigration. Isn’t it time for Congress to deliver solutions that reflect both our shared values and our national interests?

All undocumented immigrants, essential workers, Dreamers, and those fleeing disasters or political persecution should be provided a pathway to citizenship without more delay.

Thank you for fighting for change.