Why Am I Not Surprised? 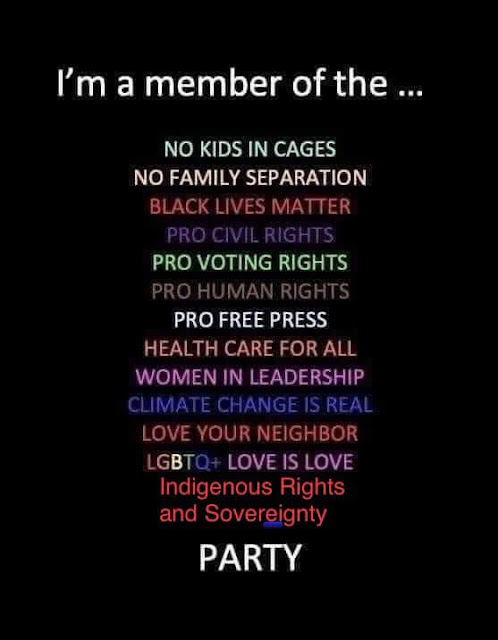 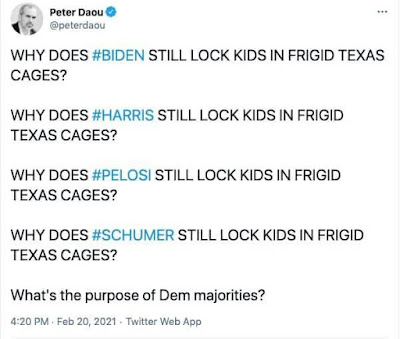 Why Am I Not Surprised?

by Redd (not a psychic) Phlagg

I'm frequently asked, "How did you know Biden wouldn't give us the $2,000 he promised back in January before the Georgia special election. Are you psychic or something?"

"No, I'm not psychic," I'll reply. "I just read the signs, and the signs were fairly clear on this pronouncement. You'll notice he's not done or said anything of any importance about Medicare For All in his first month, either, and he's also backed away from even promising Obamacare with a public option."

"Hey, you're right!" my questioner will exclaim. "You must be psychic."

"No, not psychic. I'm just observant. You can do likewise."

I switch into my teacher mode in an attempt to get my companion to connect the dots on their own. "Okay, here's what you do. Just watch a politician closely for a while and follow his or her most common pattern of behavior.  What have these two examples--the promised $2,000 check and the promised Medicare For All and Biden's lack of response on either issue--have in common?"

"Sure, he's busy, but who isn't?" I'll heave a sigh here, but I won't give up. "Let me give you some more examples. Biden says he'll be an environmental president, yet he doesn't support even the Dems' watered down version of the Green New Deal, and it's open season on hunting wolves in Wisconsin now because his EPA won't put them and the rapidly dwindling Monarch butterflies back on the endangered species list to protect them from going extinct. When asked if he would forgive most student debt like he said on the campaign trail, he hems and haws. So, Biden says one thing and does the opposite, right?"

"Yeah, sounds like he's really busy," my companion says with a blank look on his face. "I sure hope we get that $2,000 check soon. I've been laid off since late March 2020, and my wife has left the state and taken the kids to live with her sister since they've got heat, and the landlord is ready to evict me."

It's at this point in the conversation that I usually feel like repeatedly bashing my head into a wall in frustration.

It seems some folks of the "Blue MAGA" persuasion can put two and two together and come out with six. They will almost always believe every utterance coming out of a Democrat's month and will give them the full benefit of the doubt. Doubly so if the Dem politician is good-looking and young(ish)--'cause how can a pretty lady lie, right? 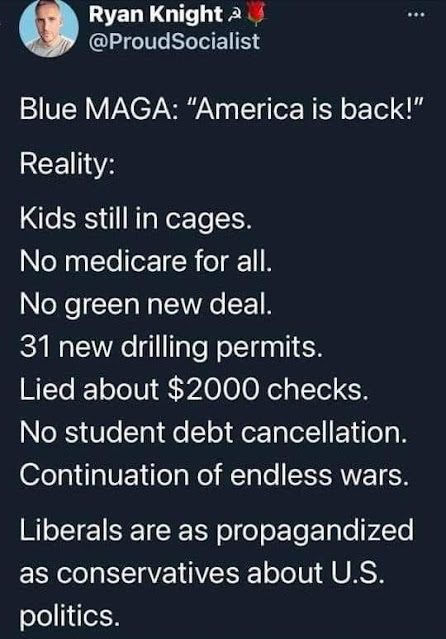 Oh, to be so innocent and trusting!

And yet, they're hurting--badly. Whenever they notice that I'm batting a thousand when it comes to predicting what Biden's responses will be on the issues, they're impressed and honestly confused as to how I can be so certain what Biden will do/not do. It's almost as if the cognitive dissonance inside their skulls is too much to bear, so they just shut down and regurgitate the party line and drool down the front of their shirts.

How are these poor besotted souls any different from the original red-hatted MAGAts who blindly followed Trump? Answer: They're no different. They've joined a cult that tells them how to think and what to say. When painful reality creeps up on them, they could find themselves in an existential crisis. In time, some might even be willing to walk away from the lies and seek solace elsewhere in the arms of a welcoming "third party."

But not all will.  I've observed their behavior patterns closely. These blindly devout "blue-no-matter-who" types are the ones who, when the next election rolls around, will more than likely cast their ballots as they're instructed by the corporate-owned-and-operated Democratic Party USA. They'll believe every word, every promise, and fall for every trick in the book.

Why am I not surprised?

Is there any way to save these individuals from themselves? Furthermore, is there any way to save our country from the destruction to our environment and society that is caused by these Red/Blue cult members? Until the cultists leave their cult by recognizing how they are simply acting as a front for the billionaire oligarchs who truly run the show, there is no hope. We are screwed.

Next time someone makes a comment that they're surprised why they haven't received their stimulus check or Medicare For All yet, tell them you're a psychic. You're a psychic who will predict what Biden won't do next. Maybe if enough of us do this it will convince them to join our cult, the cult of intelligent and independent thinkers. 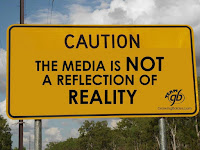 BIO: Redd Phlagg has seen the handwriting on the wall--and it was scribbled there using purple crayon by the Red/Blue cultists. Redd's mission in life is to help de-program these sad souls and lead them back to reality, thereby freeing the world of endless enslavement to the capitalist class. It's a lofty goal, but Redd heartily welcomes you to join in this crusade.

Half of America In or Near Poverty 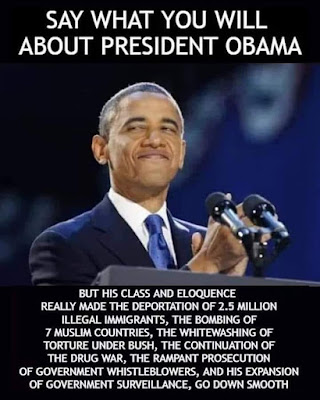 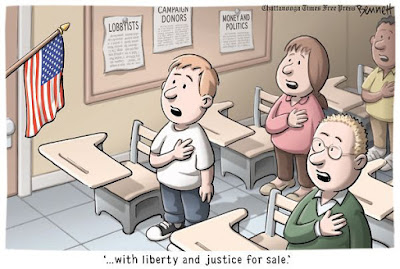 At a town hall last week, President Biden was asked about taking executive action to cancel up to $50,000 of federal student loan debt for millions of Americans.

Biden replied, “I will not make that happen.”

Join Public Citizen in urging Joe Biden not to give up already on using his authority as president to provide millions of Americans relief from crushing and discriminatory student loans.