A Future to Believe In

A Future to Believe In
by Cindy A. Matthews

'Tis the season to enjoy caroling...

I can hardly believe it... We've made it to the end of 2015 and Bernie Sanders is set to take on his Democratic challengers in the Iowa caucuses in just a few weeks. Who would have guessed so many millions would flock to Bernie when he first announced he was running for the White House in late April? I know I'm awestruck by the overwhelming enthusiasm expressed by Bernie supporters throughout the country and abroad. Everyone is looking for "a future to believe in" and Bernie Sanders gives us all a solid chance at obtaining that future.

When I came across Barb and others on Facebook back in the spring, I felt relieved to learn that I wasn't the only person in Northwest Ohio who admired Bernie Sanders. I wasn't the only one who thought, "If Bernie ever runs for president, I'm voting for him!" But little did we realize how many others in this mostly rural portion of the Buckeye State were also interested in learning more about the progressive senator from Vermont. We have held meet-ups and debate watch parties. We have phone-banked (I'm told this is a verb) and brightened the night with Bernie's Light Brigade. We have collected signatures to put Bernie on the ballot in Ohio and some of us (lucky me!) have volunteered to become Bernie delegates at the Ohio Democratic caucus on January 5. We have become involved in bringing about that "future to believe in" because we believe in it wholeheartedly, and it's all because of Bernie Sanders' leadership.

New Year's celebrations often revolve around making resolutions or goals to meet for the year to come. Have you made any detailing how you're going to help Bernie Sanders' campaign? Are you going to pass out flyers? Participate in a phone bank? Help people get to the polls on the primary day? Don't be shy. Tell us in the comments below what goals you've set to help bring a truly progressive agenda before your fellow voters.

And as we close out the first seven months of The Bernie Blog and plunge madly forward into the new year--the election year, no less!--let's reflect back on some of those "best of" moments from our early efforts to support Bernie's campaign. Great rallies, great speeches, great debate moments, great promo events, great photos, great graphics, great memes, great articles, great haikus, great writers, great blogs, great instructional videos, great filks, great music videos... Oh, there are so many wonderful and original Bernie-inspired songs! Wouldn't it be great if there was an award called the "Bernie" (sort of like the Grammy, Emmy or Oscar) to bestow upon all the creative Bernie supporters who have enriched our year? 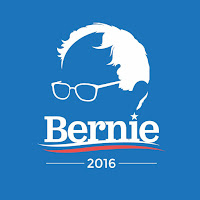 If you're interested in helping get an "awards program" together, please contact The Bernie Blog at thebernieblog2016@gmail.com We could ask for nominees in various categories and set up an online poll to allow the people to vote for their favorite song, photo, meme, blog, etc. Also, what would a "Bernie Award" look like? Should it be patterned after an Oscar statuette? Your suggestions are needed.

Keep feelin' the Bern, folks. It will be a happy 2016 for us all because we truly have a future to believe in once Bernie Sanders is in the White House.

Here are some possible nominees for the "Bernies". Can you think of others? Tell us! Email us or put them in the comments below. Thank you.

The second 100 days of Bernie's campaign in photos--awesome and inspirational! https://medium.com/@BernieSanders/photo-gallery-the-second-100-days-of-the-bernie-sanders-presidential-campaign-64ae88cf3121#.7hqk72qxn

A fantastic live streaming network for the 99%: http://live.bernie2016.tv

A info-packed article about how well Bernie's doing:
http://www.huffingtonpost.com/brian-hanley/10-ways-bernie-sanders-do_b_8850824.html


Here's a potent short video that would make a great TV commercial:


Happy New Year from all of us at The Bernie Blog!