The Media "Bern-Out" vs. The Media Black-Out 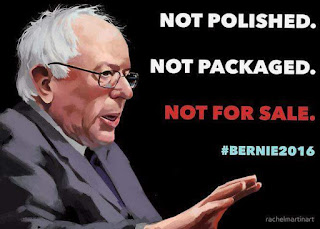 The Media "Bern-Out" vs. The Media Black-Out
by Cindy A. Matthews

(Editor's note: We are updating these links on this post as we receive new sources for news about Bernie Sanders' campaign. Thanks for sharing! #FeeltheBern)

Much has been said about the media "black-out" of Bernie Sanders' record setting rallies happening across the U.S. this summer. Of course, much of this discussion has taken place between Bernie's supporters and not among the members of the "establishment media" themselves. When talking to persons who aren't particularly active on the Internet, or who receive the majority of their political news through local/national newspapers and television/radio stations, supporters excitedly sharing their admiration of  Bernie Sanders observe friends or family members scratching their heads and asking, "Bernie Who?" It's as if the outspoken independent senator from Vermont simply doesn't exist.

(If you still don't know what I mean, read this excellent article "Two Candidates Surge in 2016 Polling--But Only Trump, Not Sanders, Fascinates Media"  from the Fairness and Accuracy in Reporting web site. The statistics are very telling.  Click on this link to sign a petition to protest NPR's poor coverage of Bernie Sanders' campaign. Their bias is horribly obvious.)

Many feel this media black-out (or blatant ignoring) of Bernie Sanders' polling surge and well-attended events is due to their corporate owners. These print and broadcast media moguls are frightened of how a Sanders presidency might affect their profits. Would they have to pay their fair share of taxes? Would squirreling profits to offshore accounts in the Cayman Islands or Switzerland be outlawed? And, scariest of all, would they actually have to give their employees paid maternity/paternity leave, paid vacation time and promise their workers at least $15 an hour? Oh, the horrors! 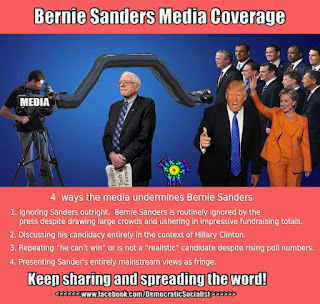 While ABC, NBC, CBS, PBS, NPR, CNN, Fox News, and the like, refuse to give much television/radio time to showing the rapidly growing popularity of Bernie Sanders, all is not lost for those viewers who'd like to hear and see the candidate in action. The Internet has come to the rescue of the wannabe informed voter with a variety of web sites and live-streaming services providing live and recorded coverage of Bernie events. Here are the links to just a few of them.

One of the best, with team coverage and live-streaming of Bernie's rallies:
Bernie2016TV

The new link to subscribe to their channel:
https://www.youtube.com/channel/UCYZGETbTWW-0wv_csBcMwfw
http://live.bernie2016.tv

Before you think all is bleak in regard to the mainstream "establishment media", here's a link to an optimistic video that shows you just far we’ve come since April 30, 2015:
https://youtu.be/vlo-qSnuKec

What's even more exciting, there are many talented singers and performers recording music videos extolling the virtues of Bernie's platform. Think of it as "Bernie MTV". You can turn on the videos and sing along at You Tube:
Bernie Sanders Music Videos

Web sites that regularly post news articles on Bernie Sanders' activities, in no particular order, include:

Bernie's not being completely ignored in the foreign media. Check out this excellent story of Bernie's growing popularity in pictures as posted on The Guardian. (Mind-blowing, isn't it?)

While it may not seem fair for the major American newspapers and television/radio networks to blockade decent news coverage of Bernie Sanders' run for the White House, the people will not be denied access to the truth. To quote those zany comedians of TV's Mystery Science Theater 3000 (who had trouble getting viewers for their show in its early days on Comedy Central): "Keep circulating the tapes!"  Lucky for us, we don't need VCRs--we just need a decent computing device and Wi-Fi. 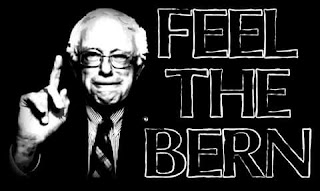 So, Bernie supporters take heart and keep the "Bern-Out" going. Good news has a way of traveling and getting disseminated no matter what. We #FeeltheBern here at The Bernie Blog and want to do whatever we can to keep the information flowing.

Please share your links to web sites, music videos, online blogs and magazines that regularly post Bernie Sanders-related content. You can post them in the comments below or email them to us and we'll list them on The Bernie Blog. #WeStandTogether #Bernie2016

We'll see you at the Books for Bernie book and garage sale this week in Perrysburg, Ohio. Keep spreading the news to all your friends and neighbors--vote for Bernie Sanders in 2016!
Posted by The Revolution Continues at 3:00 AM