Revealing the Real "Out of Town Extremists" 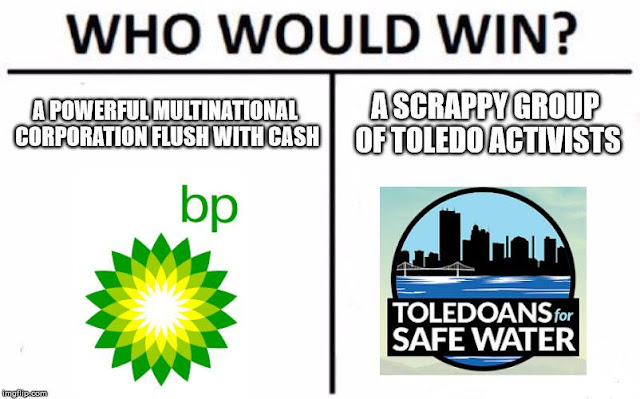 The David vs. Goliath story of the century continues when a revealing campaign finance report is finally released to the public. This is what we're up against in our fight to save our planet from further environmental degradation--the endless pockets of Big Oil. But We the People have too much at stake to stop now.


Toledo, OH: Yesterday (April 5), the post-election campaign finance reports from the February 2019 Special Election revealed that out-of-state opponents of the Lake Erie Bill of Rights (LEBOR) spent almost 50 times as much as Toledoans for Safe Water, the group trying to protect Lake Erie. Toledo Jobs and Growth Coalition, which formed to oppose the LEBOR, led a well-funded campaign against the citizens initiative during the special election. Nevertheless, more than 61 percent of Toledo voters voted in favor of Lake Erie.

BP Corporation North America, Inc., based in Houston, Texas, is listed as the sole monetary donor to the anti-LEBOR campaign, donating $302,000 with a wire transfer on February 12, 2019. Toledoans for Safe Water spent a total of $5,899.57 to advance the LEBOR.

Toledo Jobs and Growth Coalition list campaign payments to Yellowstone Associates for consulting and New Troy Strategies for targeted direct mail, phone calls, radio ads, and text messages. Both organizations are based in Virginia and registered to Mary Cheney, daughter of former Vice President Dick Cheney, according to the Virginia Secretary of State website.

“The time has come for corporate-owned politics to take a backseat to the citizen-led efforts and movements for change. We want to be the ones who influence and shape our communities to reflect our values and protection for the city we call home,” stated LEBOR organizer Julian Mack.

“Lake Erie is the lifeblood of our community. Without a healthy lake, we the people of Toledo, not Columbus or Virginia, will suffer the consequences of health problems and economic loss. LEBOR shows how people can and should address the democracy problem that creates and fosters the major environmental issues we have been powerless to stop. These campaign finance reports, plus the lawsuit filed by another large corporate entity reveal the system and structure that has to be changed if a livable future in Toledo will exist at all,” commented Bryan Twitchell, LEBOR organizer.

The reported contributions and expenses are listed below.


Now, an activist speaks out on this latest revelation.

The Real "Out of Town Extremists"
by Sean Nestor

Yesterday was the deadline to submit campaign finance reports disclosing how much money was raised and spent on the February 26 special election in Toledo. This was Toledo's FIRST opportunity to see who the mysterious "Toledo Coalition for Jobs and Growth" was - and the results are interesting.

This entity is neither from Toledo nor even a coalition; it was BP North America out of Houston, Texas - and they spent $302,000 pouring lies into the heads of unsuspecting Toledoans about the Lake Erie Bill of Rights. And, in spite of that, they still lost. 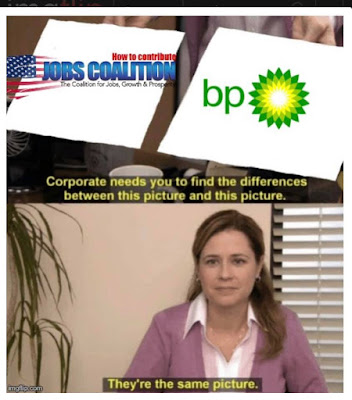 It's nice to know that sometimes, democracy still works. The Lake Erie Bill of Rights passed with a landslide 61% approval in spite of these fake ads, and two of our organizers are heading to New York City next month to give a speech about the LEBOR in front of the United Nations.

Still, our law is battling for its life in the courts, where high-powered lawyers are hard at work trying to make sure large corporations can remain unaccountable for the pollution they dump in our drinking water. The fight continues.

I'm proud to know that our scrappy grassroots group, Toledoans for Safe Water, managed to beat a large multinational corporation in an election despite being outgunned 50 to 1 in fundraising. This just goes to show the power of committed citizens working together to fight for change.

Can A Lake Have Rights? 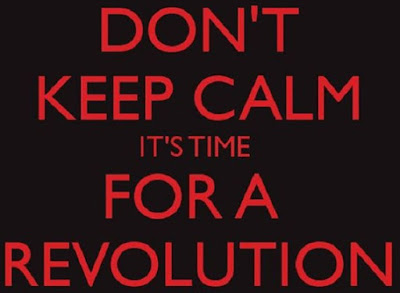 The Revolution Continues is attempting a sideways move to another Blogspot site because of the bad code that has made its way onto the original Blogspot page. Never fear--we will continue to update the original page since so many have the URL bookmarked or linked from their web pages. We're hoping this will work to keep this site free of viruses and free of those annoying ads almost every progressive website has nowadays, but who knows? Fingers crossed that it will.

Speaking of avoiding those annoying ads...

You can help us out by donating to keep the blog ad-free and functioning. The editor pays for internet, electricity, etc., out of her own pocket, and she would like to be able to pay her contributors some day soon, so your generous monetary gifts are appreciated.

Please consider donating a buck, $5, $10 or $20--any amount you can give to keep this progressive site going. Help us become a strong alternative voice protesting against the corrupt establishment and its paid-off corporate mouthpieces. Give to TRC today. Thank you. 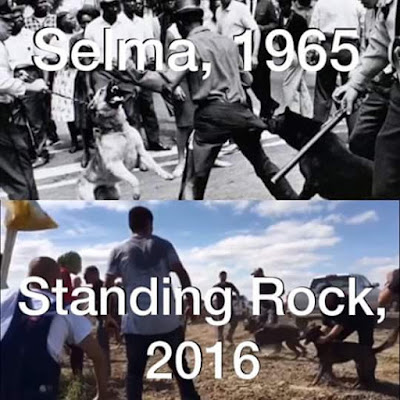 We can’t rely on the courts to strike down every bad idea coming from Trump. We, the people, need to seize action.

Within just a couple of hours of each other, Trump signed an executive order supposed to expedite construction of the Keystone XL pipeline, after his prior executive order had been stricken by a court; and, separately, a judge struck down a Trump executive order revoking a sweeping ban on oil and gas drilling in the Atlantic and Arctic oceans.

You might think that we can simply lather, rinse, and repeat judges striking down everything illegal done by this corrupt administration. But you know that with Mitch McConnell packing the courts, we can’t count on judges to save us. We, the people need to stand up. We must resist every single time Trump tries to resurrect this zombie pipeline.

The pipeline will not only damage the environment but residents along the pipeline route also don’t want it! That’s why I’m writing to implore you to sign the pledge. The ask is simple:

"I pledge, if necessary, to join others in my community, and engage in acts of dignified, peaceful civil disobedience that could result in my arrest in order to send the message to President Trump and his administration that we will not permit the construction of the Keystone XL or other climate-killing pipelines."

Click here to take the Trump pledge of resistance!