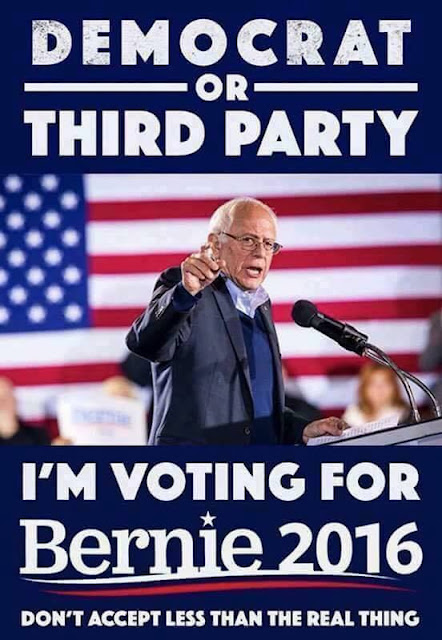 It's #OurRevolution and it has begun. Celebrate! 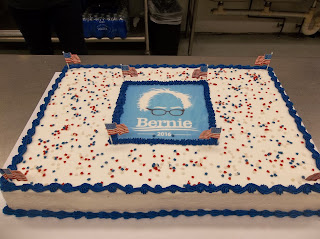 
by Cindy A. Matthews

Just as our forbearers declared themselves free from Great Britain 240 years ago, this year we declare ourselves free of the corruption and divisiveness of the oligarchs' two-party system. We are free to express our sense of outrage at the outright election fraud and voter suppression tactics employed by establishment politicians who care more about their Super PACs than their constituents. We are free to join together behind a banner that claims we all have "a future to believe in" and not a tomorrow of fear.

So today as you light your fireworks, eat your picnics and sing patriotic songs, don't forget to cherish your rights of independent thought and action. Cherish the gift we've been given called Bernie Sanders and his political revolution. Vow to make the pilgrimage to Philadelphia in a few weeks to where our first representatives sat and contemplated the costs of breaking away from the mother country. Vow to raise your voice against the injustices of the corrupt DNC. United in numbers we are strong.

Let 2016 be our new year to celebrate our freedom from tyranny. Let it be the last year we tolerate "politics as usual" and voter apathy. Berners are here to stay. We'll be filling the halls of Congress and ours state house soon.

While Berners stand united in Philadelphia in their support for democracy untainted by corporate greed, others will attempt to divide us and set us against each other. We must stand firm.  Remember the chant heard during the Democracy Spring protests: "A people united will never be divided!" Stand strong, stand firm and we'll #SeeYouInPhilly. 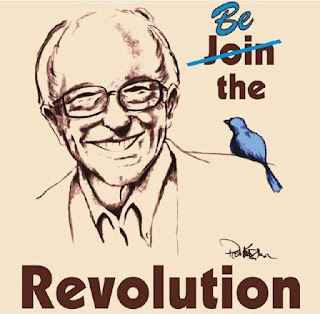 The more the People and Bernie Sanders succeed, the more the Democratic Party screams for “democratic unity” behind the establishment candidate.

I don’t know about you, but I think the establishment could use an education about what “democratic unity” means.

If the establishment were really fighting for democratic unity, the party would be rallying behind the candidate who united the People, not trying to rally the people to unite behind the party.

To change a broken system, we have to address the root of the problem.
Senators and members of Congress refusing to do their jobs, the DNC promoting their own agenda, and corporate money in politics for starters. This country isn’t being run by elected officials protecting the rights of the people. It is being run by big corporations paying off members of Congress to pass policies that contribute to massive profits for the top 1%.

This is far more than just a presidential election.

This is a revolution to recover the democracy the establishment stole from us.
This week, I asked a member of Congress how the People can help change a system that refuses to hear proposed policies that protect our constitutional rights.

“Well, that’s a tough one. Next question.”

That’s a tough one? In other words, Don’t bother trying? Go back to sleep? The system can’t be changed? 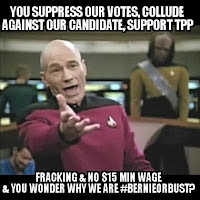 That is just not an answer I am satisfied with. I have a better one: Vote them out!

Tough, but not impossible.

Statistically, if independent voters were included in the process, it’s likely the lead would be firmly in the hands of Senator Bernie Sanders.

Despite the current “lead” Hillary Clinton has in the delegate count, she will not be able to clinch the nomination prior to the convention. The people have spoken--at least the people who have been allowed to participate have--and Bernie won state after state in the primaries.
Millions of people cannot be ignored forever.

Despite the best efforts of the establishment and the mainstream media to do just that, the Political Revolution is getting stronger. Last I checked, ignoring a problem doesn’t solve the problem.

Our democracy has been stolen from us. We want it back.

See you at the contested convention. 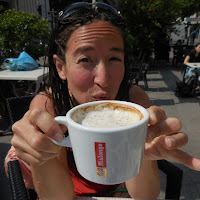 ***
And now a word from the very talented Bard for Bernie: 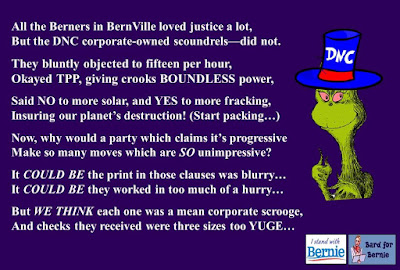 The DNC convention looks like it will be contested--or at least contentious. The FBI interviewed Hillary Clinton on July 2 about her easily hacked private email server. Keep your fingers crossed we hear of her indictment before July 25, and Bernie Sanders will be recognized as the honest public servant he is. We'll celebrate a Happy Independence on that day, free from corruption and bought-off politicians!


Bernin' up the Road for Bernie!
https://www.facebook.com/BinoRuns4Bernie 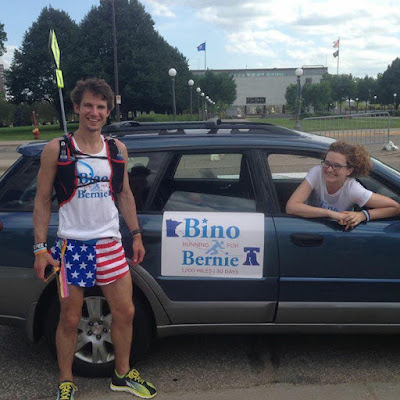 Minnesota Bernie Delegate Michael Gibino is running all the way from St. Paul to Philadelphia--and you can help him. He's still looking for places to spend one night along his route in Ohio and Pennsylvania. He also has a fundraiser going to help him pay the high costs of staying in Philly and attending the Democratic convention. Here's what he says about his epic journey for Bernie in his own words:

I'm running 1200miles/30days as a Minnesota National Delegate to "Ignite the Bern" from MN to the DNC in Philly. I'm raising awareness of income inequality by also fundraising for Mile in My Shoes, a nonprofit I volunteer with to eradicate homelessness. Learn more below:

•A penny a mile is only $12 dollars! Small contributions appreciated :) www.crowdrise.com/binoruns4bernie OR www.paypal.me/MichaelGibino

• A video of when I successfully moved the motion to reform and eliminate the superdelegate system at the MN DFL State Convention!: https://www.facebook.com/BinoRuns4Bernie/posts/186648831733419 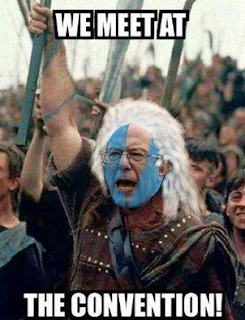 There are so many Bernie delegates struggling to get to the Democratic National Convention in Philadelphia. If you are able to donate even just a little to help delegates get to the convention, please check out the following web sites:

Many delegates have GoFundMe pages as well. We do, too. If you're motivated and want to help us out, please visit our page at www.gofundme.com/thebernieblog


Thank you. We hope to see you in Philly. Our Revolution has begun!
Posted by The Revolution Continues at 3:00 AM