Why Bernie Sanders Will Win – Part 1: Economics
by Joe Brunoli
a.k.a. EuroYankee

The establishment political set and the mainstream media seem to be wholly fixated on writing off Bernie Sanders as an “extreme left” politician from a “small, mostly white state” and a “self-proclaimed socialist.” And because of these attributes, he has no chance of winning in the general election – this presumably because America is a “centrist-right” or even a “conservative” country.

They are overlooking some very basic facts of history and socio-economics, as well as politics. It is true that over the past 35 years, “liberal” has been become an epithet, while “conservative” has become an emblem that more and more Americans feel comfortable with. But why is that? 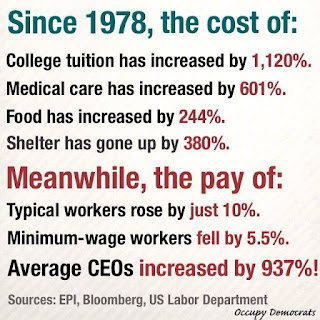 It Started with Reagan

Ronald Reagan embodied a strident, “conservative” persona, rejecting Jimmy Carter’s namby-pamby “liberal” identity. The so-called “Reagan Democrats” were drawn to Reagan because he was willing to tell then that they did not have to lower their thermostats, drive smaller cars, or switch to the metric system. America was a “shining city on a hill” whose best days lay ahead. America was perceived as weak in the world, and he, Ronald Reagan, would beef up the military and make America strong again.  He played on racial tensions, revving up the “Southern Strategy” that had worked for other Republican candidates since Nixon. And of, course, Reagan was the first one to propose a Constitutional amendment to ban abortion.

Since 1980, the idea of what makes a “conservative” has been framed in mostly non-economic terms.  Creationism, Christianity, Abortion, Gay Rights, Gun Control, Affirmative Action – these are the key issues that defined an American as a Conservative. It was never so much about tax cuts and small government, as far as the average voter was concerned. Sure, every conservative would automatically stand for cutting taxes, but that was an auxiliary, second tier issue that did not engender the type of fervor among the electorate.

For thirty years, Republicans won elections by putting gay marriage, abortion rights and other cultural “wedge issues” on the ballot.  And they are still using that playbook. 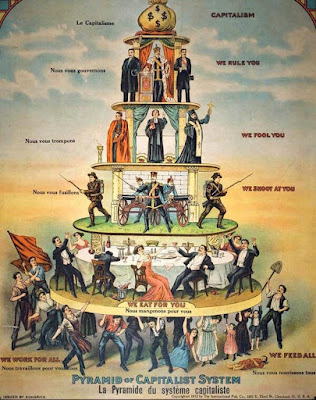 The Democrats, for their part, have also happily played into this game. The Democratic Leadership Council, headed by Bill Clinton, co-opted conservative economic principles and left the Democratic Party only a slim playing field on which to oppose Republicans on cultural issues. “Liberal” billionaire donors like George Soros, Michael Bloomberg and Tom Steyer give to Democrats to support cultural, social or environmental issues – not economic ones. These are smart men. After all, they know enough not to go against their own economic interests.

But for just how long can the American voter be asked to vote against his or her own economic interests in order to promote their positions on cultural issues?

Bernie Not Afraid to Speak about the Economy

In Bernie’s speech announcing his candidacy, he spent fully 45% of his time speaking about economic issues – more than twice as much as any of the other candidates, and almost three times as much time as Hillary Clinton did. Some Republican candidates didn't even mention economics in their announcement speeches.

Resentment at growing wealth inequality, the disappearance of the middle class, the harsh reality that most people are moving backwards economically compared to their parents – these are all issues that have been percolating, seething below the surface of the superficial political debate in America. But they are important issues, and when people say that Bernie is “touching a nerve” they vastly underestimate the power of his message.

As an Independent who refuses to take PAC money or billionaires’ donations, Bernie now occupies a unique position in American political history. I believe history will show that his is the winning ticket. 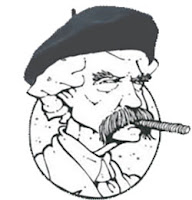 Bio: Joe Brunoli, a.k.a. The EuroYankee, is a US ex-pat with dual US-EU citizenship. Originally from Connecticut, Joe currently splits his time between his ancestral residence on Lake Como, Italy, and his apartment in Barcelona, Spain. He travels Europe extensively for his work and tries to find time to comment on trends, attitudes, politics and points of interest - especially as they may affect or regard the US. 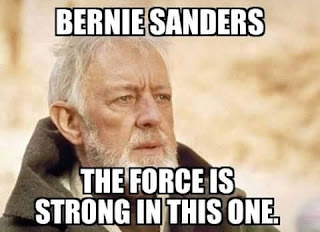 Have you been hosting debate watch parties, voter registration parties, etc., for Bernie? Have you been inputting them into the national site's event map? Please remember to do so in order to give them an idea just how many events are happening and how many Bernie supporters are out there. #FeeltheBern and keep spreading the word--Bernie Sanders for president in 2016!
Posted by The Revolution Continues at 3:00 AM