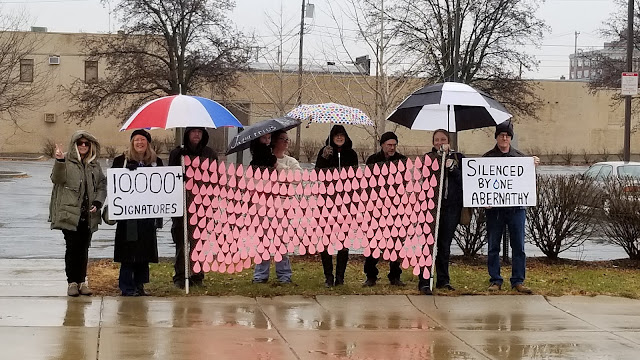 A Christmas Miracle!
The Lake Erie Bill of Rights is on the Ballot

Toledoans for Safe Water activists braved the cold rain to attend the Lucas County Board of Elections hearing to see if their citizens initiative would be allowed on the February 26 special election ballot. After months of delays and frivolous "protests", the BoE was forced ("reluctantly" they said) to listen to the will of the people and allow the Lake Erie Bill of Rights on the ballot.

Fundraising has begun in earnest to help cover advertising costs to reach the voters. No doubt the deep pockets of the CAFOs and Big Oil & Gas lobby will finance a smear campaign to convince voters that clean water and a clean lake isn't in their best interests.

Here's their latest new release and link to where you can help:

Victory for Lake Erie!
Board of Elections Votes to Put Lake Erie Bill of Rights on Ballot

Toledo, OH: On Thursday, Dec. 20 the Lake Erie Bill of Rights (LEBOR) advanced to Toledo’s February 26th special election following a hearing held by the Lucas County Board of Elections (BOE). The BOE scheduled the hearing after a formal protest was filed against the LEBOR by the Columbus law firm McTigue and Colombo on behalf of Toledo resident, Josh Abernathy. Toledo attorney, Terry Lodge represented the resident group, Toledoans for Safe Water, who submitted the LEBOR for placement on the ballot back in August.

After hearing legal arguments from both sides, the BOE adjourned to another room to consult with the county prosecutor. When they re-entered the room, they returned a unanimous vote to move LEBOR forward to the special election, although not without making several personal statements on their views on the LEBOR. Ultimately they upheld the people’s right to vote.

“Finally, Toledoans will get to vote on whether or not they want to protect the lake and their drinking water. For far too long the people have been silenced with their rights revoked on baseless grounds, and the Lake has never had its rights recognized. Now the people will have a chance to change that,” said Crystal Jankowski with Toledoans for Safe Water.

Prior to the hearing, supporters of the LEBOR demonstrated outside in the rain with signs and visual displays representing the 10,500+ signatures of Toledo residents silenced by the protest of one resident, Mr. Josh Abernathy.

“Members of Toledoans for Safe Water have already been planning our campaign, but will now kick it into full gear with today’s decision”, stated Markie Miller of the group. “If people want to help with the campaign they should contact us at www.LakeErieAction.org.”


Your Drinking Water Could Soon Come From Unregulated Rivers and Streams